The device in question is of course the Samsung Yepp YH-925GS hard disk MP3 player/photo viewer. This device is the high-end model in Samsung's lineup of hard disk-based players and retails for about $300CDN ($250USD). The Yepp YH-925GS contains a 20GB hard drive and sports a nice bright 1.8 inch, 260K colour LCD screen with a resolution of 160x128 pixels. 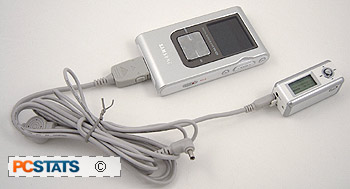 It also comes with an initially restrictive list of software it will actually work with, but more on that later.

One interesting ability that we don't often see in hard drive players is the Yepp YH-925GS's ability to transfer files to and from other USB storage devices without the need for a computer to act as an intermediary. The package includes a USB host adaptor which can be used to connect the player directly to another USB device for file transfer.