Over the years, AMD has allowed enthusiasts a lot of freedom to experiment with components although things have tightened up slightly with the release of the Athlon64. Sadly, gone is the full multiplier access in AMD's mainstream products, complete multiplier control is only available in its super high end 'FX' processors.

Considering the amount of heat the Athlon64 X2 4800+ produces while under load (110Watts), it's a perfect opportunity to place it under the freezing Prometeia Mach II GT evaporator. I wanted to get the best performance possible, and as the test memory has been tested up to 270ish running 2-2-2-5 with 3.8V, we kept things running 1:1. 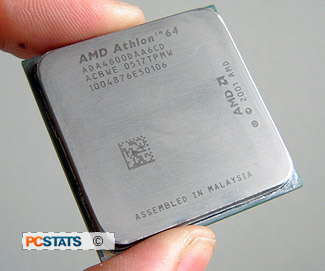 Right from the get-go the Athlon64 X2 4800+ started to have problems at 217 MHz.... weird. The system just kept BSOD'ing while booting WindowsXP. Increasing the CPU voltage to 1.35V seemed to stabilize that, and we were able to continue onwards with the overclocking. The CPU hit another snag at 236 MHz, and once more a voltage increase was the necessary solution. This time the voltage was bumped to 1.4V. At 243 MHz the system had problems POSTing and, you guessed it CPU voltage solved this problem.

To reach the 3.0 GHz mark, the voltage was increased further still to 1.5V. Of course since we were testing the Athlon64 X2 4800+ with a phase change cooler, the system was able to compensate for the increased heat output while still maintaining sub-zero temperatures. If you attempt overclocking with a standard heatsink, we do not recommend increasing the voltage this high. The Athlon64 X2 4800+ produces a heck of a lot of heat.

Never satisfied, we continued to increase the motherboard clock speeds, and in the end we could run the Athlon64 X2 4800+ at 3.14 GHz (262 MHz) 100% stable with 1.7V. As you will see shortly, overclocking did boost performance very nicely in the benchmarks. Be warned though, you had better have a very good cooling solution before attempting anything like this. Now, on to the benchmarks!

Overclocked tests were run in the 32-bit WindowsXP environment only.