Leave your AAA batteries at home folks, the Samsung YP-U1ZB draws power from an internal rechargeable Li-polymer battery (non-removeable) that puts out roughly 13-hours of music. Best of all, the whole contraption recharges right in the USB slot with the same USB2.0 jack it uses for moving data. If you're without daily access to a computer, this is not right MP3 player for you.

There is no FM tuner on the YP-U1ZB, which is unfortunate, but the player does offer voice recording at the touch of a button. Recordings will quickly dig into music storage capacity as the WAV tracks are layed down, so keep that in mind before reciting pages of notes for that J.M. Coetzee English-lit report...

Fresh From the Box

Being that the Samsung YP-U1ZB is about the size of a Bic lighter, the shape and layout of the control buttons is pretty good. The record and play/pause keys (along the side of the YP-U1ZB) are textured differently so users can pick out the right key without glancing at the unit.

Volume control and track navigation are rolled into one circular paddle on the face of the player, with the menu key at center. The all-important hold key sits by itself on the opposite side of the player; it comes in handy if button pressing gremlins infest your pockets or purse.

The LCD screen back light illuminates each time a button is pressed, so if you're constantly in a well lit area we'd suggest turning it off (menu > settings > display > blacklight > value: off) and enjoying a little longer battery life. You can also set the back light to remain on for a few seconds, or constantly if you wish.

The device slips easily into any pocket or it can be looped around the neck for a quick run round the block by way of a shiny silver lanyard which comes with it. The LCD screen displays four lines of information for those times when you can't remember what song you're listening to, and the song title even scrolls along to reveal the full track file name. The stereo headphone jack, metal lanyard loop, and microphone port are all positioned at the top of the player. 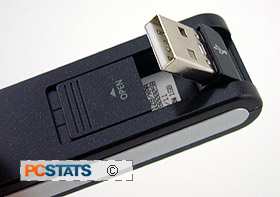 Flipping the player around reveals a full sized USB2.0 jack tucked away into the back. Slide a little plastic bit back, and then use a fingernail to flip out the USB jack and presto - the YP-U1ZB is good to go as far as data transfers are concerned.

The convenience factor of not having to carry around a bag of mini-USB adaptor dongles, power bricks and chargers cannot be overstated. If you've had an MP3 player like that in the past, you'll know what I mean.

By integrating a full-size USB jack right into the unit, there are no caps to loose (since it swings in and out, no cap necessary) and nothing to hold back the Samsung YP-U1ZB from pulling double duty as a 1GB USB memory key too. Albeit, it's more than likely going to be full of music so the practicality of using this MP3 player wholly for mundane data storage is rather unlikely. A dedicated device like the DataTraveler Elite is much better route to go. Still, in a pinch the option's there with the YP-U1ZB.

Now, how about those headphones?