The Samsung Syncmaster 971P display comes with its software manual on the CD, the document is well laid out and presented in simple HTML format. The digital manual has little animations of the displays' features, and links to support websites as well as the full LCD specs listed.

Since the Syncmaster 971P monitor is a DVI based display, there is one critical piece of software we have to consider installing; MagicTune/MagicRotation.

Neither MagicTune nor MagicRotation are particularly heavy applications, but in the course of the review PCSTATS found them unnecessarily cumbersome. In the end we were left missing the basic manual controls for brightness and contrast (at the least). The "S" button on the left hand side of the folding base allows some customization of the luminosity and colour temperature. It loads MagicBright which has preset scenarios: Internet, gaming, Text, Sport, Movie Custom and Dynamic Content. Dynamic Contrast gives the best overall look with a mostly neutral preference to 6500 Kelvin.. 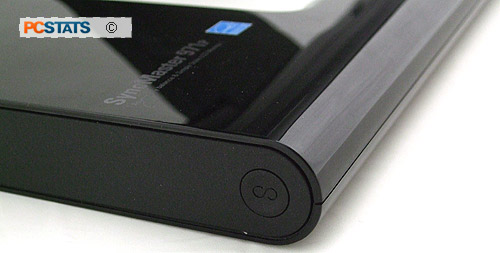 Don't you just love it when software bundled in with a product fails to work, or doesn't work with Vista? PCSTATS quickly discovered that the software provided by Samsung on the CD with the 971P was not compatible with Microsoft Vista. After following the link to the website, we installed the newer Vista MagicRotation software. The other application you may require is MagicTune, it brings all the OSD controls to the user since the 971P lacks any kind of manual OSD control.

In our tests, MagicTune ver 2.0.13 for Vista was unfortunately a bust with our Geforce 8600GT and Vista combination. At this point we gave up on software based monitor OSD controls.

It's a monitor, it needn't be this complex to change visual settings. Right?

The problem with the MagicTune software may have been linked to the nVidia drivers, which were not correctly installed at first (Vista was just using the generic GPU drivers). After a quick update, MagicTune worked for about a minute then popped up a box saying "This computer system does not support MagicTune...."

Our dislike of software based OSD remains as committed as ever. Since no computer is ever properly configured in all ways, off loading these basic monitor OSD controls to extra software is pointless - if you need to make adjustments rely in the default nVidia/ATI/Intel display options.

Luckily for us, the DVI video signal takes care of most of the display configuration automatically. But seriously, Samsung - what's up with this poor software?

The only buttons on the 971P are the touch sensitive power switch and a function key you won't see unless you go looking for it. The power button responds to contact with skin, so gloves (leather, latex, nitrile, etc.) or otherwise covered fingers will not work. Samsung include a DVI-to-Analog, DVI video cable and a USB A-to-B data cable with the package. The DVI end of either monitor cable fits into a small recessed pocket in the base of the 971P display (there is one DVI signal input jack), with the wire running out along a small groove. The bulky white DVI connector is thus completely obscured from view.

Let's check out the highlights next shall we?