One of the biggest changes with the P55 Express chipset is what it doesn't do. While traditionally Intel chipsets have used the northbridge to control memory (including last generation's Intel P45 Express), that job now falls to the Core i5 and Core i7 processors and on-die memory controllers. The shift makes for some big improvements in memory performance, fortunately for the end-user memory compatibility is still pretty familiar. The GA-P55-UD3R will support up to 16GB of dual-channel DDR3 RAM, in speeds of DDR3-800/1066/1333 and even DDR3-2200 under certain overclocked settings. 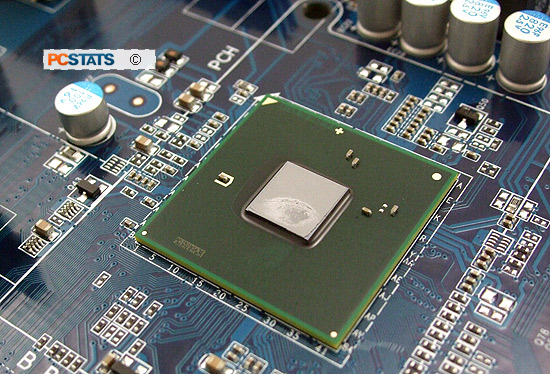 Another thing you won't find on the Intel P55 Express chipset is an add-on PCI Express 2.0 controller, it's been moved on to the die of socket 1156 Core i5 processors.

Although some motherboards using Intel's P55 Express chipset will run dual NVIDIA Geforce videocards in SLI mode, the GA-P55-UD3R doesn't have this feature built-in. Not that it matters much any more, NVIDIA's latest videocards never materialized and never will.

With Intel's Core i5 processors now handling most of the roles that would have traditionally been the job of the Northbridge, there's no longer any need for a two-chip core logic. Intel has merged the Northbridge and Southbridge into a single entity named the "PCH", P55 Express to you and me, it controls the legacy PCI slots, storage, networking and USB.

In addition to its two PCI Express x16 slots, Gigabyte's GA-P55-UD3R has four legacy PCI slots and a single PCI Express x1 slot (with x1 lanes of bandwidth, naturally). This leaves a fair amount of room available for expansion. The board is well laid out so that even with two double-wide videocards installed, there's room for a pair of legacy expansion cards. Useful if you have an old TV tuner and fancy soundcard. 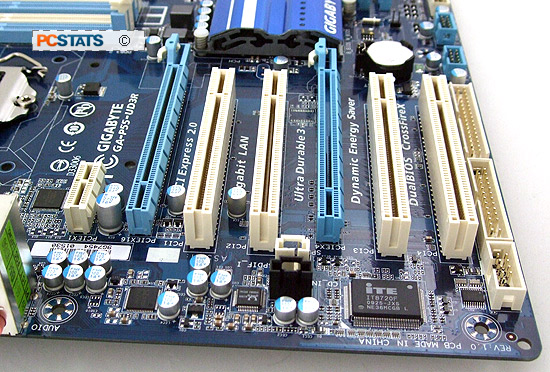 Intel's creation of the PCH controller for the Intel P55 Express chipset is an evolution of the ICH10R southbridge controller that graced the Intel P45 Express chipset. The PCH storage controller can handle up to six SATA II connection at 3Gb/s in RAID 0, 1, 5 and 10 modes. Gigabyte adds two more controllers into the mix, a JMicron JMB362 controller that powers two eSATA ports that can be run in RAID 0, 1 and JBOD modes, as well as Gigabyte's own SATA controller, which controls two more SATA II 3Gb/s that also do RAID 0, 1 and JBOD, and finally a legacy PATA adapter that can handle up to two IDE devices. Altogether that's 8 internal SATA connections and two eSATA connections, a lot of storage by anyone's definition. Unfortunately, there's no SATA 6G on this particular board.

Around back the I/O panel abounds with connectors; 10 USB 2.0 ports ready to go, a gigabit RJ-45 port, coaxial and optical S/PDIF audio connectors, 8-channel audio stereo jacks and two e-SATA ports for external devices. The Gigabyte GA-P55-UD3R motherboard retails for around $150 CDN ($140 USD, £85 GBP) which puts it right where motherboards based on Intel's P45 Express chipset used to be. When combined with a processor like the $200 Intel Core i5 750, it's pretty easy to build a socket 1156 computer system for under $600.

These range from 6-layer PCB with 2oz. copper substrate, to the Japanese made solid state aluminum polymer capacitors and other electrical components chosen for low temperatures and long life. Including the energy saving features built into it, Gigabyte is certainly pulling out all the stops when it comes to making the GA-P55-UD3R competitive. With Intel P55 motherboards, features really distinguish the products, so browse those spec sheets carefully!

Gigabyte hasn't stopped there though. There are a lot of motherboards that will be based on Intel's P55 Express chipset, and standing out from the crowd is more difficult than ever before. To seal the deal Gigabyte introduced something called Smart 6.

Smart 6 is a team of interstellar robot lions that combine to form... no wait, that's Voltron. Smart 6 is actually a suite of programs that work with Gigabyte's motherboards to speed up and expand the capabilities of your computer system. PCSTATS will be taking a closer look at the Smart 6 later on in this review.

Okay, let's go in for a closer look at the Intel P55 Express chipset technologies and then show you some more of this nice Gigabyte motherboard.