There are five PCI slots for future expansion, and the standard assortment of USB ports (8) along with two SATA headers as well. The board layout here is nice, with the main ATX power connector and located nicely alongside the right of the DIMM slots, and all the ports and headers are located at the very bottom of the motherboard. 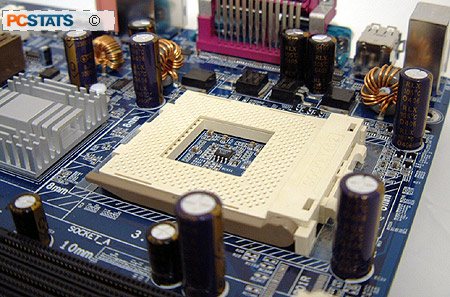 The CPU socket is flanked by some rather tall capacitors, which is a bit unfortunate, since this makes installing larger socket A heatsinks a bit of a challenge, though more on this in just a moment. The Gigabyte 7VT600P-RZ doesn't require the ATX12V connector, which is good news for those of you with older power supplies. Even though the 7VT600P-RZ is touted as a budget motherboard, thanks to the VIA T8237 Southbridge the board does at least boast native Serial ATA support.