There is a stigma that higher density DRAM modules do not overclock well because the increased memory capacity is hamstrung by the slowest individual DRAM of the bunch. That rule of thumb doesn't hold much water in this case, and you'll soon see why...

Overclocking the Super Talent T800UX2GC4 memory on an nForce4 SLI Intel Edition motherboard is a bit different than what we're used to, but the differences are purely academic. With motherboards based on this popular nVidia chipset, users must raise the bus speed instead of the FSB. The value of that figure sounds more impressive, but don't let that fool you, the methods are essentially the same. 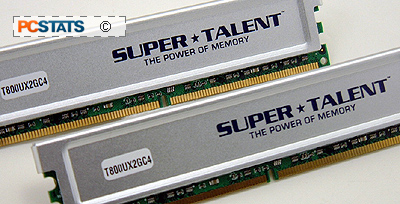 With the Super Talent T800UX2GC4 memory running in sync with the FSB, it was raised in 10 MHz intervals. At 880 MHz, the system started to show signs of instability... however increasing the memory voltage to 2.0V resolved this. Continuing onward, the Super Talent modules easily broke past the 900 MHz barrier, and without much difficulty either.

At 930 MHz the memory again started to BSOD while loading WindowsXP so the voltages were stepped up to 2.1V.

That finally enabled the memory to hit a high of 964 MHz!

Please keep in mind that the aggressive 4-3-4-8 timings were used to achieve that speed, and this makes the feat even sweeter. :-)

Out of curiosity, the memory timings were loosened to 5-5-5-12 to see what impact that would have on Super Talent's memory when overclocked.... and as you might have guessed it breached the 1000 MHz mark and finally sputtered out around 1020 MHz. Looser CAS timings may allow for larger clock speeds, but performance takes a hit so all benchmarks were conducted at the 4-3-4-8 timings. For example in Battlefield 2, framerate results at 1020 MHz with 5-5-5-12 timings were 207.453FPS; that is slightly lower than what the T800UX2GC4 memory could do at 964 MHz with aggressive timings.