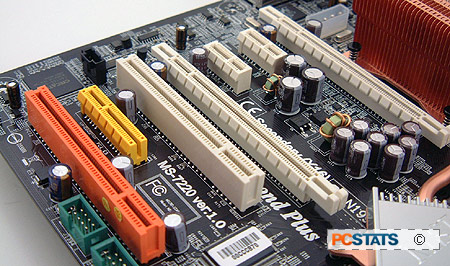 At first glance the MSI K8N Diamond Plus looks like a pretty regular nVidia nForce4 SLI x16 motherboard... it support SLI, has a pile of onboard features, it even has that somewhat alluring 'new motherboard smell' that we reviewers grow quite fond of, though it's probably some horribly toxic cast off from the solder bath or PCB fabrication... Anyhow, if you take a moment and look closely at the shot of the board right above, you just might notice something that shouldn't be there. Look right next to the PCI Express x4 slot, the yellow one.

That little yellow PCI Express x4 slot itself isn't closed on the end, and that allows it to accommodate a third PCI Express x16 videocard if you wish. Now the third videocard cannot be combined with an SLI setup for more 3D performance, but does allow the K8N Diamond Plus to support up to six computer monitors (two monitors per videocard) in one sitting.

So for example you could have twin Geforce 7900GTX's running in SLI, and then use this third slot for a Geforce 6600 or even a PCI Express TV-Tuner card. We'll look at the Creative Audigy next, before moving onto the overclocking...