It's always interesting to see how memory will run with tight CAS latency, and with DDR2, you never know what you're going to get.

The tightest timings the Buffalo Technology FireStix FSX1000D2C-K2G will run at was 3-4-4-10, which actually isn't bad for DDR2 memory. Starting at DDR2-800 speeds, the memory was overclocked in 5 MHz intervals.

At 875 MHz, the FireStix FSX1000D2C-K2G memory started to show some signs of instability, and the memory voltage was increased from 1.8V to 2.0V to resolve minor stability issues. Continuing upwards, the memory shortly hit the wall at 925 MHz, anything higher and the system had issues booting into WindowsXP. 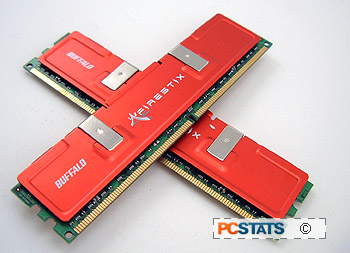 Next up, we'll try loosening the memory timings to the default setting; 5-5-5. The FireStix FSX1000D2C-K2G frequency was overclocked from 925 MHz in 5 MHz intervals once again. This time around, overclocking the Buffalo FireStix FSX1000D2C-K2G was quite uneventful until the test system hit the dreaded 1020 MHz barrier.... that speed is like the monolith in 2001.Anyway, our attempts to try speeds above 1020MHz generated some system instability, and so we kept things at 1020MHz for the benchmarks.

It's most likely the processor is holding back the memory as the Intel Pentium D 840 would be overclocked to 4.08 GHz. With a better overclocking processor I'd expect the Buffalo FSX1000D2C-K2G to reach much higher - but since we haven't tested that for certain, it's just an assumption.

The details of how the Buffalo Technology FSX1000D2C-K2G memory test system was configured for benchmarking, including the specific hardware, software drivers, operating system and benchmark versions are indicated below. In the second column are the general specs for the reference platforms this pair of DDR-2 memory is to be compared against. Please take a moment to look over PCSTATS test system configurations before moving on to the individual benchmark results.

Business Winstone 2004 runs real applications through a series of scripted activities and uses the time a PC takes to complete these activities to produce its performance scores.