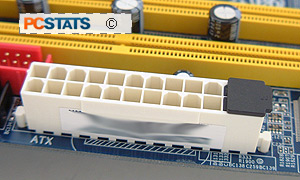 For all the wonderful features and options we've just mentioned, you can expect to pay about $115 CDN ($100 US/£55 GBP) for the Gigabyte GA-8I945GZME-RH motherboard. Married to the right low-budget CPU, it will make the foundation for a low cost workstation or basic office PC. With passive cooled heatsinks on both the Intel 945GZ Express and Intel ICH7 chipsets, there are no fans to add noise or fail in the long term either. It's always nice to have a quiet platform.

The layout of components on the GA-8I945GZME-RH are organized and generally easy to access. If a PCI Express x16 videocard is installed, it will need to removed before the DDR-2 memory will go in willingly - a common formality with microATX motherboards. The GA-8I945GZME-RH is equipped with a 24-pin ATX power (20-pin compatible) and 4-pin auxiliary 12V power connector. Gigabyte recommends using a power supply with a minimum 350W rating. 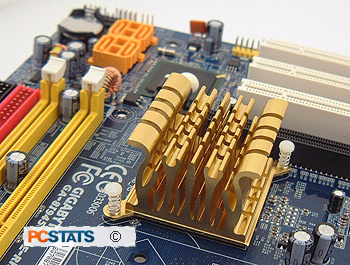 If all the hard drives in the computer you are thinking of upgrading are IDE, it's time for you to pick up some SATA disks. The Gigabyte GA-8I945GZME-RH has just one IDE channel, and that basically means it's for optical drives, and optical drives only.

Looking at the small pile of items bundled in with the board, there's actually nothing particularly special to note. It certainly would have been nice if a USB header or the 7.1 HDA surround sound bracket were included. Neither are, though we do get a single SATA, IDE, and floppy cable.

True to form, the user's manual that accompanies the GA-8I945GZME-RH is well written, and will guide newbie and expert users alike through the pertinent steps of getting this board up and running in no time. The blue motherboard PCB is well labeled, so headers and ports will all have a description close by. For a detailed guide on the subject building your own computer see PCSTATS Beginners Guide to Assembling a PC, or any of the other Beginners Guides for that matter. 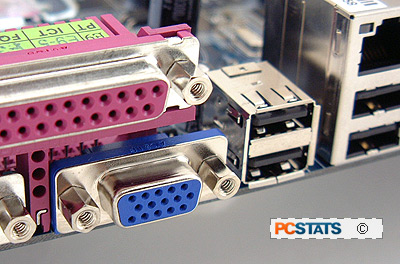 One of the nicest aspect of the Gigabyte GA-8I945GZME-RH motherboard is that is comes with it's own graphics built right in. There is a PCI Express x16 (with 4 lanes of PCI Express only) videocard slot if you wish to use a stand alone graphics card, and if you play a lot of first person shooter games you will. If you don't need the power of separate videocard there's always the integrated Intel GMA950 videocard.

The Intel Graphics Media Accelerator 950 is DX9.0 compatible and adequately suited for 2D workloads in Microsoft WindowsXP or Windows Vista.

The GMA950 runs on a 400MHz 256-bit graphics core and has an assortment of technologies to make playback of 1080i high definition (HD) content on your computer monitor run smoothly.

High definition output to an external HDTV is not supported on the Gigabyte GA-8I945GZME-RH, although devices called Media Expansion Cards (MCE) apparently bring added functionality in this respect. Intel's GMA950 supports screen resolutions as high as 2048x1536 at 75Hz via a single analog VGA jack at the rear I/O panel. PCSTATS will be running a pair of 1080p and 720p high definition video's through the onboard GMA950 graphics card to see how it handles the work load a little bit later in this review.

Next up is a breakdown on the full feature set of the Intel 945 Express series chipsets, including the 945GZ Express used on the Gigabyte GA-8I945GZME-RH motherboard.