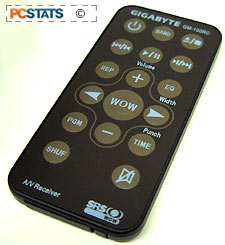 The DVD/CDROM drive sits behind the front control panel which offers a visually appealing display that seems to hover behind the dark plastic face.

Controls are kept of the minimum, just two dials which when pushed in scroll through the menus, and when turned, control individual settings. A small remote control takes care of the remaining stereo controls like pause/play, FM tuning and the audio-style presets via an infrared link.

Announced this October at Compute 2003, the Gigabyte M1600A is so new that we don't have any pricing information on it, but after just one look at this amazing little device it will be hard to resist. Small form factor PC's are extremely popular right now, and the M1600A goes a long way towards making a true home theatre PC a reality - both and without the actual PC powered up.