Taking the same approach as with the MSI NX6600GT-VTD128SP video card PCSTATS tested previously, MSI has eschewed the typical bundle of older games for one slightly outdated but extremely good one. In this case, each MSI NX6800 TD-128E comes bundled with a copy of Far-Cry, one of the better First Person shooters released recently. Though themed differently, it is arguably equal to both Doom 3 and Halflife 2 in terms of graphical flair and pure fun. It may lack the burnished surfaces and amazing textures seen in Chronicles of Riddick or Doom 3, but it makes up for these with miles of realistically depicted jungle, smart enemies and lots of vehicles to ride in. Far-Cry's high-end graphics settings can also put a hurting on just about any PC, making it a good partner for a fast videocard.

While the MSI NX6800 TD-128E does not include any additional software, the card does come with the necessary hardware add ons, including a DVI-to-analog converter, a breakout box with component, composite and S-video outputs and a standard S-video cable. All the above accessories are coloured a brilliant day-glo green, which may or may not appeal to you, but is certainly noticeable. 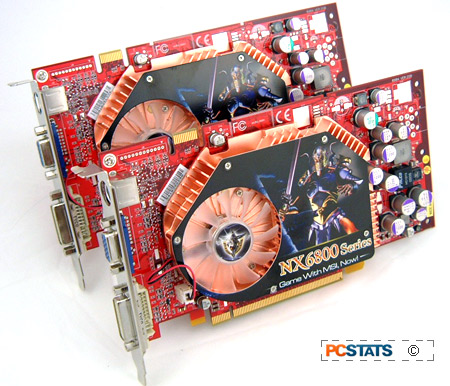 The card itself is fairly typical, reflecting the design choices that MSI has made on all of its recent video hardware. A large copper plated cast-aluminium heatsink covers both the core and the memory, while the single small fan proved to be audible, but not loud enough to stand out in a sealed computer case.

Single DVI and VGA connectors are available, as well as the port for the breakout box. For a high-end card, the NX6800 TD-128E is quite quiet, which we appreciated.

Thanks to its PCI-Express interface, the NX6800 TD-128E does not require an additional power connector, deriving all its power from the PCIe x16 slot. As you can see, the SLI connector is present on the top of the card, allowing it to be linked to other SLI-compatible video cards with a compatible motherboard.

I was glad to note that MSI ships the NX6800 TD-128E in a more reasonably sized box than those holding some of the company's other high-end cards. It seems wholly unnecessary that while most motherboards come in a cardboard box barely large enough to contain them and their accessories, video cards frequently ship with acres of surplus cardboard and plastic. MSI is by no means the only company doing this, but I think it's high time that the computer parts industry took the same responsible approach to packaging that the video game industry adopted a few years ago.