If you plan to overclock a dual core Intel system be prepared to deal with a lot of heat.... if you think a Prescott runs hot, just imagine what two under the hood is like!

Before we started to push the Foxconn 955X7AA-8EKRS2 motherboard, I first lowered the memory multiplier to 1:1, this way the memory would not limit the top speed of the board itself. 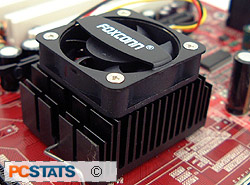 Starting at 200 MHz I increased the FSB in 5 MHz intervals and the motherboard seemed pretty up to the overclocking challenge.

We hit our first snag at 224 MHz and had to increase the CPU voltage 0.1V above stock. That settled things down quite a bit and the board turned out to be very overclocker friendly. We then hit another problem at 243 MHz FSB, and increasing the CPU voltage an additional 0.05V as well as increasing the System Core Voltage an additional 0.15V above stock, resolved that.

In the end the Foxconn 955X7AA-8EKRS2 went as high as 256 MHz stable, anything higher and the board would reboot randomly. Not bad considering we tested with an air cooled Intel Pentium D 840 processor. The CPU tends to run very hot when operating above 4 GHz!