Epox has a strong tradition in overclocking and its boards usually perform quite well. With this in mind, I was expecting some nice numbers from the 5NVA+ SLI. Before starting to overclock the motherboard though, I first lowered the memory speed to run in sync with the FSB. This will lower performance, but we are only interested in testing the top speed of the actual motherboard itself.

The Nvidia nForce4 SLI Intel Edition chipset increase the bus speed instead of the FSB, so this makes overclocking slightly more tedious. Starting at 800 MHz I increased the bus speed 40 MHz at a time, that equals to 10 MHz FSB since the P4 bus is quad pumped. 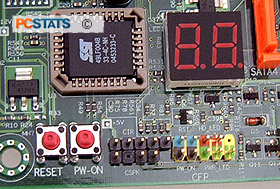 The Epox 5NVA+ SLI was up to the overclocking challenge, but we hit the first snag at 10% overclock or 880 MHz. At this speed, the motherboard had problems POSTing and actually gave us a C3 error on the Port 80 display. Increasing the chipset voltage from 1.4V to 1.6V solved that, and we continued upwards. At 960 MHz the motherboard again flaked out and so did the Pentium D 840 processor. Increasing the chipset voltage to 1.7V and CPU to 1.45V fixed the booting/BSOD issues.

In the end we settled at 988 MHz, anything higher and I could not safely run through every benchmark without crashing. A speed of 988 MHz equals 247 MHz FSB, and that is a pretty decent overclock considering everything is stock and the CPU is cooled with a standard heatsink.