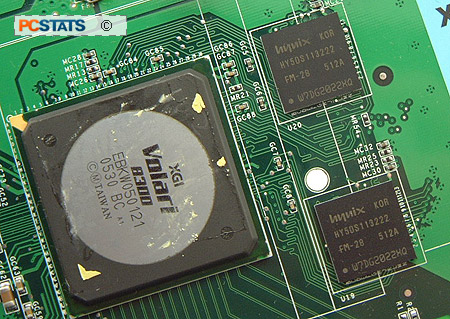 The XGI Volari 8300 GPU is built on UMC's 0.13 micron manufacturing and has a transistor count of 90 million. The core uses a PBGA (Pin Ball Grid Array) packaging. Architecturally, the Volari 8300 GPU is equipped with a 2 x 2 pixel pipeline, which means it has the same number of pixel rendering pipelines as an nVidia Geforce 6200TC / Radeon X300SE, but more Texel pipelines (600 million Pixel Fill rate/1200 million Texel fill rate).

The total memory bus bandwidth is 64-bits, and that is broken up into two separate 32-bit memory controllers for a maximum theoretical bandwidth of 5.6GB/s. The Volari 8300's memory controller only supports DDR memory, and as such there is 128 MB of Hynix HY5SD113222 BGA DDR RAM on the reference videocard.

When running in 3D mode, the 128 MB frame buffer stores the data which is on the screen, and eXtreme Cache technology dynamically allocates up to an additional 128 MB of system memory to use as video RAM for additional/miscellaneous textures. The GPU runs at 300MHz, as does the memory. The Volari 8300's dual 350 MHz RAMDACs translate into decent 2D display support at resolutions up to 2048x1536 pixels.

As mentioned earlier, the XGI Volari 8300 TruShader SE graphics engine is DirectX 9.0 compatible and adheres to Vertex Shader 2.0 and Pixel Shader 2.0 standards. This allows casual gamers to load the latest games, but to be realistic performance will be minimum even at lower resolutions.

One very neat feature of the XGI Volari 8300 is its Cool Power II technology which handles videocard power management. Cool Power II dynamically adjusts core/memory clock speeds depending on video load and supports Intel's Device Performance States (DPS) as well as PCI Express Active State Power Management (ASPM). According to XGI, the power consumption of the Volari 8300 can dip down to as low as 13W!