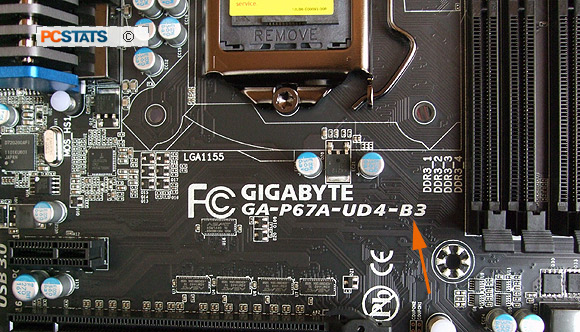 Other features include; 3x USB power boost, dual BIOS's, On/Off Charge for recharging devices like the Apple iPhone and a whack of board level components to ensure the stability and longevity of this motherboard like solid state capacitors, low RDS MOSFETS and so forth.

At the back of the Gigabyte GA-P67A-UD4-B3 motherboard you'll find (2) SuperSpeed USB 3.0 ports, a gigabit Ethernet jack, an optical and coaxial S/PDIF out, (2) eSATA III ports and the 7.1-channel audio-out headphone jacks. The audio system is based off a Realtek ACL892 codec and is Dolby Home Theatre compliant. 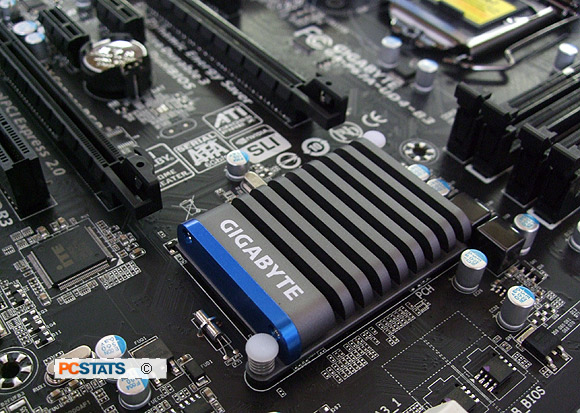 As with most Intel P67 platforms, there is no support for legacy IDE hard drives or FDD devices. The box contents are pretty slim too; you get four SATA cables, an I/O shield and a SLI bridge connector. The board's warranty is three years from the date of manufacture for US/Canadian consumers.

While Intel has created several different heatsink sizes in recent years, the socket LGA1155 'SandyBridge' CPU cooler is thankfully interchangeable with previous socket LGA1156 heatsinks. The stock 'SandyBridge' heatsink is decent, but better aftermarket CPU coolers are easy enough to find so there's no good reason not to upgrade. PCSTATS likes the low noise Noctua coolers and tower-style Xigmatek's, but really just about anything from Zalman to Scythe will cool quieter than a stock Intel HSF.

Clearance around the GA-P67A-UD4-B3's CPU socket is average, some low overhanging thermal solutions may interfere with the VRM heatsinks or memory modules if fins extend much beyond the Intel heatsink retention holes.

In case you want to install additional fans for dual videocard set ups, this Gigabyte motherboard has two PWM and two 3-pin fan headers ready for use.

With graphics and memory now handled by the CPU, the Intel P67 chipset doesn't need a very fast link to the processor. Thus, instead of complex and expensive-to-produce QPI link, Intel uses a 20Gb/s DMI link between the Intel P67 chipset and LGA1155 processors. The roles of the Northbridge and Southbridge chipsets have been merged into what Intel calls a PCH, or Platform Controller Hub.

Intel's P67 PCH supplies eight PCI Express lanes to the computer system for devices like the SATA ports, LAN, USB and PCIex1 slots. The 16 PCIe lanes for graphics cards are drawn directly from the 'SandyBridge' CPU, this has a nice side benefit of helping to cut down on system latency.

Enthusiasts familiar with the storage and media capabilities of Intel's ICH10R southbridge will find a lot in common with the P67 chipset. It provides 14 USB 2.0 ports, four SATA 3Gb/s and two SATA 6Gb/s ports with support for RAID 0/1/5/10 modes, audio and gigabit Ethernet.

In the above Chipset Feature Comparison chart you can see how all three of 6-series Intel chipsets compare to one another a little easier. The major difference between the Intel P67 Express and H67 chipsets is that the former lacks the H67's capabilities to output integrated graphics from the processor. Moving forward, the newer Intel Z68 Express chipset is essentially a combination of the feature sets of the Intel P67 and H67, with a couple bonus extras.

Next up, a close up look at all the Gigabyte GA-P67A-UD4-B3 motherboard has to offer.