MSI typically bundles heaps of software with its videocards, and things are no different for the NX6600GT-TD128E. Included with the card are 15 CD's worth of games and software; from system utilities like Restore It! and Virtual Drive, to full version games like URU, Prince of Persia and XIII.

The red PCBs are quite pretty and will no doubt will add to the 'coolness' factor of any computer with a window. PCI Express x16 slots can supply videocards with a lot more power than their AGP counterparts, so no extra power connector is required either. MSI has always been good at keeping their products quiet and this pair of NX6600GT-TD128Es hum away rather softly. 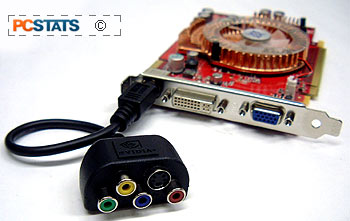 Watching a movie on the computer is ok when you're by yourself, but it's not as fun as watching one on a large TV screen with friends and family. With the MSI NX6600GT-TD128E videocard, hooking up the PC to a regular TV or HDTV is possible thanks to the component video-out cable.

MSI includes an S-Video-to-S-Video cable but no extra component cables. I can understand the reasoning behind this, since the quality of the component cables makes a big difference in picture quality. By not including them, MSI saves users a few dollars, and so they can buy what they need later.

If you do plan to run a SLI setup for your system, you'd better make sure that you have good airflow in your case. The top videocard inevitable runs much hotter than the bottom card, and this can cause some real problems if you decide to overclock.