Everything you'd expect from a NVIDIA GT200b-based videocard is here: NVIDIA PhysX, CUDA, Hybridpower, 3-way SLI, Purevideo and Graphics Plus. Support for DirectX 10, OpenGL 2.1 are of course included, although NVIDIA has stated that it will be skipping DirectX 10.1 support altogether and instead go straight to DirectX 11 with the next-generation GT300 graphics processor.

Fortunately all of this factory overclocking, custom GPU selection and Ultra Durable VGA technology hasn't raised the price too much. The GV-N26SO-896I videocard retails for around $210 CDN ($200 USD, £130 GBP), which is right in the middle of the $180-$230 price range for most Geforce GTX 260 videocards. This also puts it head-to-head with ATI's single-GPU flagship, the Radeon HD 4890 videocard. Can Gigabyte's extreme factory overclocking make NVIDIA's Geforce GTX 260 videocard a real contender, or is it just another me-too Geforce 200-series videocard? 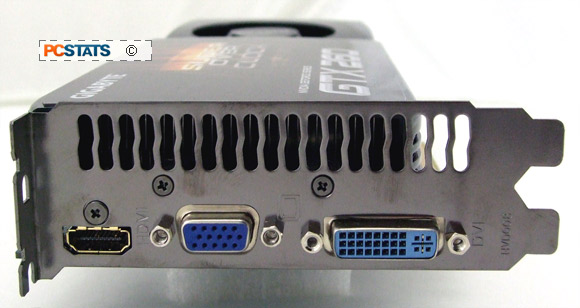 Like most gaming videocards, the Gigabyte GV-N26SO-896I videocard occupies two PCI expansion slots. If paired with a second or third identical videocard, the Geforce GTX260 can be configured run in dual or triple-mode SLI on supporting motherboards. It's always a good idea to ensure there's good case airflow so tightly packed graphics cards don't overheat or unnecessarily run fans at full duty.

The Gigabyte GV-N26SO-896I videocard supports onboard hardware HD decoding technologies care of nVidia PureVideo, so BluRay, H.264, VC-1, MPEG2, or WMV9-encoded media can be played back with little if any CPU load.

On the I/O panel of the Gigabyte GV-N26SO-896I videocard are a trio of DVI, VGA and HDMI outputs. DVI supports resolutions up to 2560x1600 pixels, while VGA can go up to 2048 x 1536, and HDMI can output at 1920 x 1080. Gigabyte includes a DVI-to-VGA and HDMI-to-DVI adapter as well. for running multiple displays. There's also a S/PDIF header with included cable to carry sound to the HDMI output. 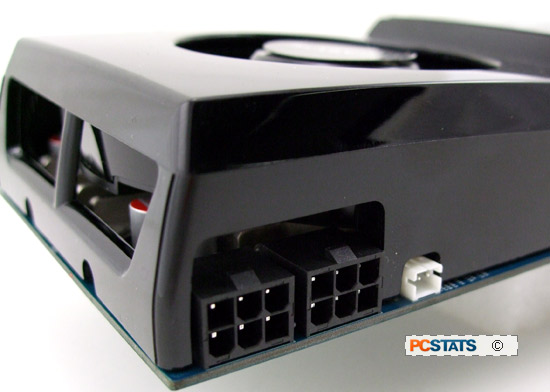 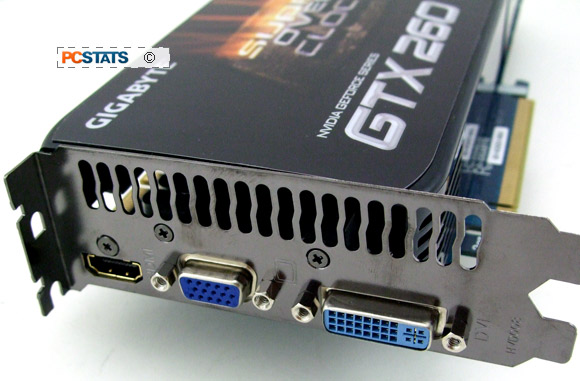 Let's take the cooler off and take a closer look inside Gigabyte's overclocked Geforce GTX 260 videocard ...