Gigabyte's special conditioning of the Radeon HD 5870 has gone beyond just factory overclocking the memory and core clock speeds. Gigabyte has also introduced the GVR587SO-1GD to the Ultra Durable VGA+ regimen; a pretty extensive array of component tweaks and improved manufacturing techniques. You may already be familiar with Gigabyte's Ultra Durable features if you've built a PC recently, and indeed some aspects like a 2oz Copper PCB, low RDS MOSFETs, Japanese solid state capacitors are Ferrite choke cores have carried over to its graphics cards.

New to this Ultra Durable VGA are five 'NEC Proadlizer' film capacitors, which we're told allow for more stable power delivery during the heavier electric loads that come with extreme overclocking. PCSTATS really has no way to confirm this, but them caps' sure do look expensive!

Gigabyte has also cherry picked the ATI RV870 GPU used for its GVR587SO-1GD videocards, testing each GPU for stability at the higher factory overclocked speeds than the GVR587SO-1GD ships with. Gigabyte calls this process the 'GPU Gauntlet,' and we can only imagine this involves little digital horses with the GPUs strapped on galloping towards one another like some modern version of medieval jousting. We'll see a little later on in this review if this extra conditioning will make the GVR587SO-1GD not just a performance champion, but an actual world-class overclocker as well. Tier 1 Sasmsung/Hynix memory has also been selected to give this customized videocard every possible edge. 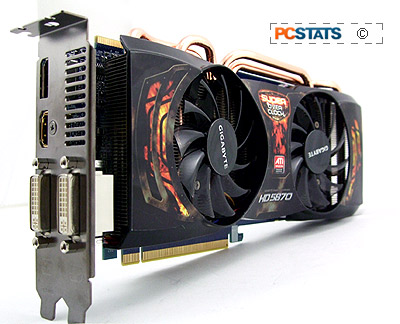 Having seen just how well the Radeon HD 5850 performed on the PCSTATS' test bench, the anticipation is ripe to see if a pumped-up and overclocked version of the big brother ATI Radeon HD 5870 will hold its own against NVIDIA's rival Geforce 400 family of videocards.

Every member of the Radeon HD 5000-family has native DirectX 11 support and is CrossfireX compliant. All of these DX11 cards also support new rendering techniques like tessellation which can greatly increase the details and complexity of 3D geometry, and GPGPU computing which allow the videocard to do specialized tasks like video encoding and image processing faster than a CPU. The Radeon HD 5870 is also compatible with Shader Model 5.0, as well as OpenGL 3.2 and supports CrossfireX.

Like most prizefighters, Gigabyte's GVR587SO-1GD PCI Express 2.0 x16 videocard commands some pretty high prices for this level of performance. Expect to pay around $510 CDN ($500 USD, £350 GBP) to get your hands on one of these babies, and be prepared to shop around a bit since demand is still very high for this heavily customized and overclocked Radeon HD 5870.

Video outputs on the dual slot wide Gigabyte GVR587SO-1GD videocard include two DVI, one HDMI and one DisplayPort. DisplayPort increases bandwidth rates that go up to 17.2Gb/s, so it can support multiple high resolution monitors. DisplayPort can also be daisy-chained, so a single display port output can be connected to a DisplayPort compatible monitor, and that monitor can then be connected directly to another monitor, and so forth.

ATI built the Radeon HD 5850 to natively support up to three monitors (with resolutions up to 2560x1600) at once using its Display Port output. This videocard will also support newer 120Mhz monitors designed for 3D stereoscopic gaming, as well as ATI's own Eyefinity gaming modes that allow monitors to be 'tiled' together to form one massive display. To fit all these ports, and the trick thermal solution, the Gigabyte GVR587SO-1GD videocard will take up to slots.