In total, that works out to (6) SATA III and (4) SATA II internal ports on one board. With that much storage room it's worthwhile installing the OS to a nice quick SSD and configuring a separate RAID 1 or RAID 5 array for critical data. 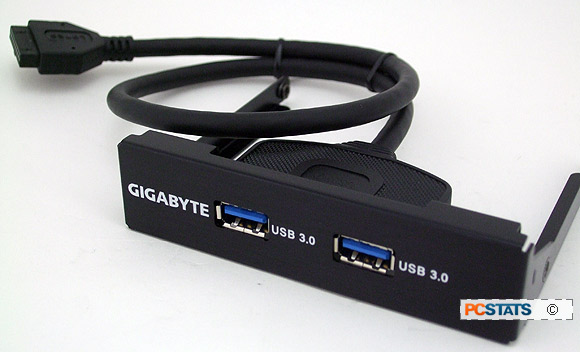 Despite of all it has going for it the GA-X79-UD5 does have its failings, though even these aren't total deal breakers. More on that in a moment....

The Gigabyte GA-X79-UD5 motherboard is made for 64-bit operating systems. That's not to say it can't run a 32-bit OS, it's just that 32-bit operating systems are architecturally limited to 4GB of addressable system memory. To take full advantage of the eight memory slots on the GA-X79-UD5 users must install a 64-bit version of Windows 8 / 7 / Vista / 2003. To that end, PCSTATS upgraded its Motherboard Test Platform to Windows 7 Ultimate x64 and bumped the memory from 4GB to 16GB. For the sake of previous comparisons, we've included a full set of 32-bit Windows 7 / 4GB benchmarks on the Gigabyte GA-X79-UD5 as well.

The Gigabyte GC-WiFi card bundled in with this motherboard is a combination 802.11b/g/n Wi-fi and Bluetooth Smart 4.0 device.

The aim of this wireless card is to better integrate the home computer with portable devices like a smart phone or tablet (ie. Apple iPhone 4S and iPad). The key technology here, Bluetooth Smart 4.0 is what you'll need to leverage mobile apps that can interact with content on a PC. By including the Wifi/Bluetooth 4.0 card up front, Gigabyte is providing users with basic tools to set up a simple 'Cloud environment' at home.

Bluetooth 4.0 is an important addition because it permits quick data syncing between a computer and a smart phone, allowing photo's, music or any other content to be transferred without cables. To that end, you've probably also noticed that many Intel X79 and Intel Z77 motherboards feature a built-in Bluetooth dongle in place of one USB port. The industry is trending towards greater desktop computer/smart phone integration for the simple reason there are a heck of a LOT of smart phones out there. :) 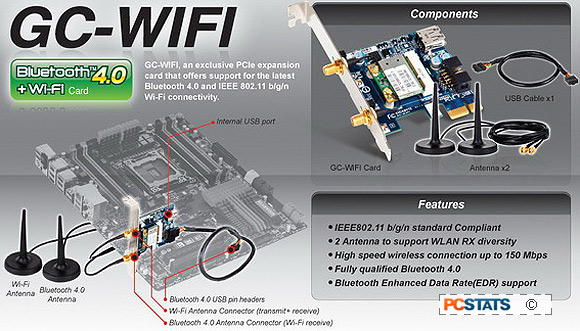 Explaining all aspects of Bluetooth Smart 4.0 is beyond the scope of this review, but basically you can think of it as a catch-all name for the three preceding Bluetooth specifications, rolled into one. We should note that while the theoretical maximum data transfer speed of Bluetooth 4.0 is pegged at 24 Mbit/s, this is not over the Bluetooth link itself. Rather, the Bluetooth link negotiates the connection and data is sent over an 802.11 link - hence the reason for the standard Wi-Fi antenna attached to the Gigabyte GC-WIFI card. On a final note, Microsoft Windows 8 will support Bluetooth v4.0 Smart.... so make sure your next smart phone does too!

Next up, a quick look at the Intel X79 chipset followed by a 360-degre up close look at the Gigabyte GA-X79-UD5 motherboard - let's take a look at $320 bucks gets you.